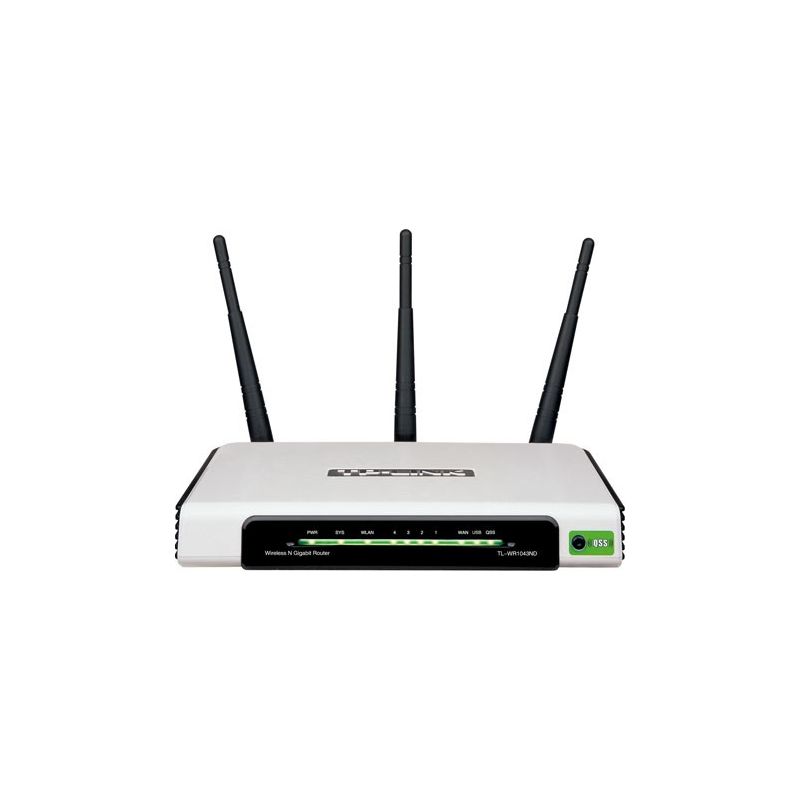 The TL-WR1043ND is a device that integrates a 4-port switch and a router to share the Internet connection.

The TL-WR1043ND is a device that integrates a 4-port switch and a router to share the Internet connection. The TL-WR1043ND offers the possibility to connect devices both wirelessly and fixed through a cable. Supports the deployment of high-speed wireless networks up to 300 Mbps, which makes it possible to work simultaneously with applications that require high bandwidth such as streaming HD video playback, VoIP calls, large file transfers and online games . In addition, it incorporates a USB port for the connection of storage units, allowing shared access by users of the local network.

Thanks to its integrated Gigabit Ethernet switch, the TL-WR1043ND offers an impressive data processing capacity that eliminates bottlenecks when transferring data between megabit cable networks and 11n wireless connections. As a result, the overall operation is faster and more efficient, allowing the downloading of large files, such as high definition videos, in a matter of minutes instead of hours.

The TL-WR1043ND complies with the IEEE 802.11n standard, allowing you to establish wireless connections up to 18 times faster and up to 6 times more coverage than conventional 11g products. This also means that the router offers enough speed to support in a fluid and uninterrupted way almost any type of application that requires an intensive use of bandwidth, such as VoIP calls, HD video streaming or games. on-line. Its powerful N technology minimizes the loss of data that occurs in long-distance transmissions and through obstacles, making your entire house a great point of access.

The Signal Sustain Technology (SST) exponentially increases the stability and performance of the wireless signal by simultaneously transmitting three groups of independent signals in space and capturing and processing them from three receivers on the destination equipment. In this way, the drops in the network are drastically reduced, while increasing the stability of the signal and the transfer rate, which supposes on average a sustained rate 50% higher than in the MIMO 2x2 equipment.

The Clear Channel Assessment (CCA) technology applies the "listen before speaking" methodology to the wireless network when managing the necessary bandwidth for channel grouping. In this way, conflicts are automatically avoided when using the optimal channel selection function and, at the same time, the benefits of channel grouping are maximized to obtain better wireless features.

Now you can share an external storage unit and share your files in a simple way. The TL-WR1043ND has a USB port that allows you to connect a storage unit such as a flash memory directly to the router. In this way, network users can instantly access the data stored in it and directly play, for example, a video in HD or share files as with a NAS (Network Attached Storage) network storage.

The TL-WR1043ND is compatible with the Wi-Fi Protected Setup ™ (WPS) feature by which users can configure network security by simply pressing the QSS button on the router to automatically establish a secure WPA2 connection, a sensitive mode more secure than the one offered by WEP encryption. This method is not only faster and safer than the usual security settings, but it is also more convenient since users do not have to memorize any password.

In a wireless network, indiscriminate browsing through the Internet or downloading of large files by users often cause households or small offices not to have enough bandwidth for important tasks. By using the IP QoS function of the TL-WR1043ND, it is possible to optimize bandwidth usage and manage bandwidth to avoid congestion, thus avoiding abuse of the connection. In this way, the users of the network are assigned a certain bandwidth in order to prevent non-critical applications from degrading the performance of the network.

Even less experienced users can easily configure their network devices. The equipment includes a CD that contains the Easy Setup Assistant application that guides you step by step through the configuration and that even helps you to select the parameters related to the wireless network and its security.