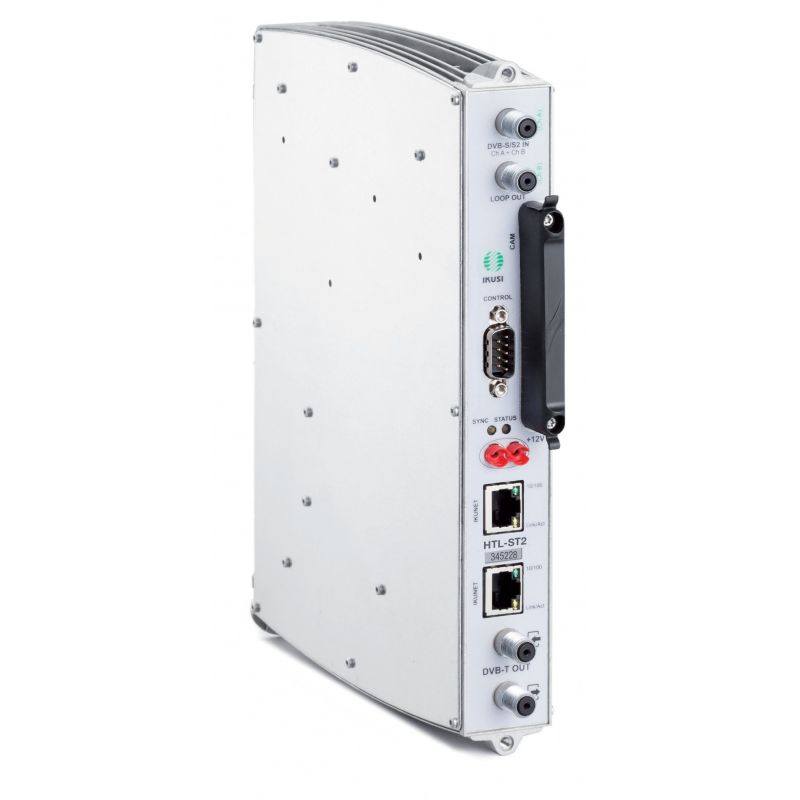 It receives the DVB-S / S2 signal and transmodulates it to DVB-T. Network control and configuration with a large number of channels without the need to re-tune the TVs. 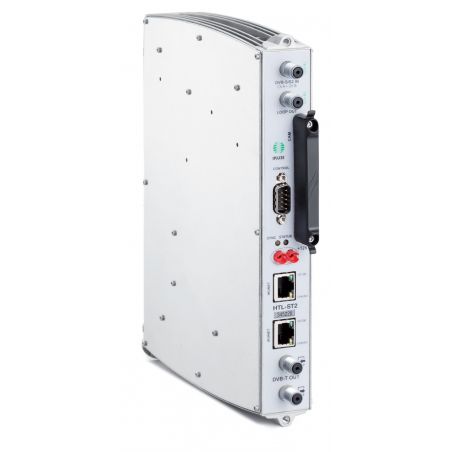 Unit which receives the DVB-S/S2 signal and re-modulates it to DVB-T signal. Grid control and configuration with large numbers of channels without the need to retune TV sets.

The HTL-ST2 transmodulator is a product which is designed and manufactured with Ikusi's own technology, given the increasing need for complex channel grids in hotels, with multiple inputs which increase the density of channels handled by each module.

Places the selected services of two DVB-S/S2 satellite transponders of the FI-Sat band in two DVB-T channels of the 51-858 MHz band. The module input connection is software configurable ("loop" or "dual input") and is equipped with DiSEqC function, meaning each module can be tuned at two satellite frequencies with different polarities. Each transmodulator includes a Web server.

The HTL-ST2 headend can be used to create channel grids and manage them remotely, providing a fully customisable grid without the need for on-site intervention. Used to manage multiple headends from a single point for efficient maintenance.

Pre-reserve channels: Envisages a future increase in channels, meaning the television sets have them in their lists and do not need to be retuned in the future.

Separation audios: Sends a video service with several different languages or audios using the same space as for an RF channel. The television present "a programme" for each language, avoiding the need for the user to choose "language" with the remote control.

Independent output channels: The two COFDM channels can be distributed in any part of the 51-858 MHz band.

Remote or local web interface connection. The HTL-ST2 transmodulator is compatible with the application for PC: “IKUSI HEADEND DISCOVERY” (can be downloaded from www.ikusi.tv). This tool allows the installer to detect the headend modules without having to modify the PC network card.

The step-by-step Wizard can be used to quickly and straightforwardly configure the headend. Once the polarity and satellite input frequency are set, the wizard shows the services available and proposes an output frequencies plan. To configure the required services, simply click on them to place them at the output.

Manual configuration. Any parameter can be modified simply from the web interface using the "drag and drop" option.

Manage all services available in the different headend inputs, distributing them towards the outputs, by simply dragging each service from the input window to the output window.

Send a video service with several different languages or audios using the same space as for an RF channel. The television set generates "a programme" for each language, avoiding the need for the user to choose "language" with the remote control.