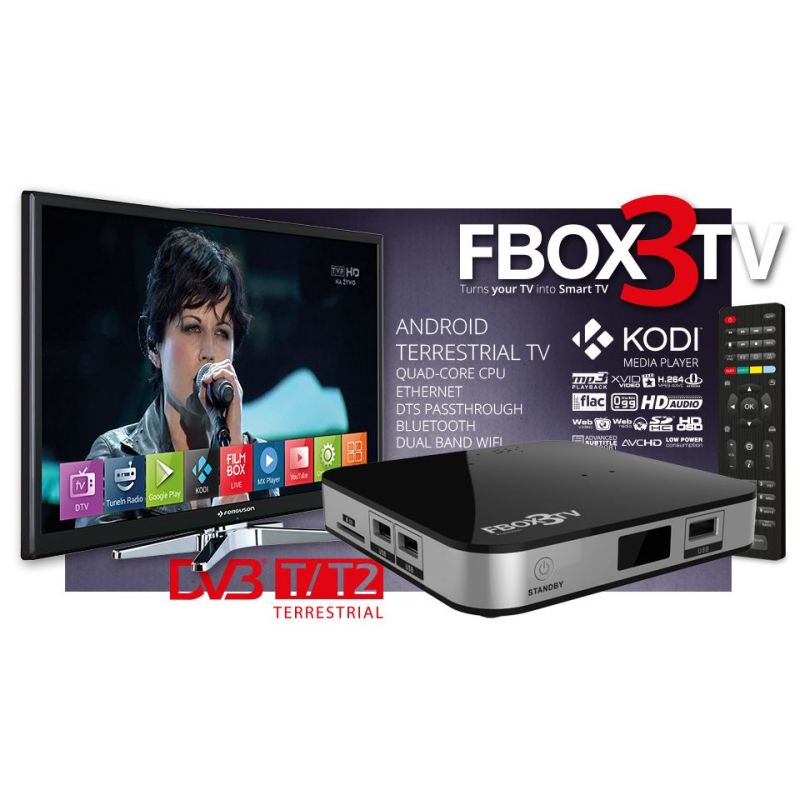 Hardware support for Kodi multimedia platform.
DVB-T/T2 module with all the functionalities of a normal receiver
(recording, rewinding, time shift and many others).
Dual-band Wi-Fi module that allows data transmission
at frequencies of 5GHz or 2.4Ghz.

Ferguson FBOX 3 TV is a compilation of capabilities of mini-pc based on Android 4.4 KitKat and TV receiver with DVB-T/T2 standard, that will meet the expectations of even the most demanding user. Hardware decoding supported by Kodi multimedia platform (or other chosen Android media player) makes watching movies fun and pleasant.

Ferguson FBOX 3 TV has a DVB-T/T2 module that allows reception of terrestrial TV signal, its main capabilities include:

…use the simple configuration wizard…

…watch and record TV without limits!

3 FBOX construction is based on AMlogic S805 processor. It is a modern, highly specialized system, which main task is to support hardware media playback. The processor has build-in decoding of (among other standards):

For the user, this means immediate device interface feedback, even with very intensive operations and – most importantly – smooth video playback even in very high quality (encoded with a big bitrate).

Ferguson FBOX 3 TV is equipped with a very efficient quad-core Mali-450 GPU unit, whereby the device perfectly handles even the most complex 3D games and media decoding tasks to a resolution of Ultra HD (4K). Thanks to the many optimizations, Ferguson FBOX 3 TV takes full advantage of this power.

Working Wi-Fi networks effectively interfere with each other, which affects the link parameters and as a result it can significantly slow down the connection. This is especially noticeable when using the internet for demanding multimedia tasks, like watching HD movies on-line. Even if you have a very fast network connection, the bottleneck could be the transmission between the router and the device. The solution to this problem may be the use of a radio frequency band 5GHz. Ferguson FBOX 3 TV has a Wi-Fi module allows operation of the device in the 2.4GHz or 5GHz band.

For lovers of high and constant transfers or persons who prefer stable communication with the switch/router using a cable, we have prepared such a possibility: Ethernet connection. Ferguson FBOX 3 TV can be connected to your home network by all means.

Ferguson FBOX 3 TV offers support for Bluetooth protocol that is widely used to transfer data. With support for Bluetooth devices, you can hook up a remote keyboard and mouse that will change FBOX into a powerful multimedia computer. Using Bluetooth, you can exchange files with other devices, eg. with telephone – viewing photos on your TV will therefore be even easier!

Ferguson FBOX 3 TV fully supports transmission of S/PDIF digital protocol. This standard allows you to transfer between two devices the digitally recorded sound without the need to convert it to analog. As a result, no sound distortion occur, resulting in the highest quality sound for the most demanding users. This standard is supported by – among others – home cinemas.

We builded Ferguson FBOX 3 TV on solid fundations of Android 4.4 KitKat operating system that is used widely by millions of people. The system is adapted for specific use by a gyro pilot.

Ferguson FBOX 3 TV has a brand new, friendlier and more personalized user interface. The new interface has not only a new look but also it has a new, much easier way to organize your apps, which – thanks to more internal memory – can be installed on the device quite a bit.

Kodi is a multimedia heart of Ferguson FBOX 3 TV and its most recognized application, able to play almost any file format, audio and video. Kodi player allows you to organize your media library and automatically downloads from the Internet informations about the media, such as album art or movie cover, cast, song lyrics and so on.

Miracats is well known and popular Android feature that allows you to display multimedia content (videos, photos) from your phone or tablet directly on the TV screen via FBOX 3 TV. It’s also a great way to display, eg. a presentation or conducting training classes.

In this small, sleek design were closed technologically advanced solutions that enable a single device to stream media from network resources or connected external drives and play (and record) TV programs using the DVB-T/T2 module. The hardware configuration is as follows:

These features offered by the Amlogic S805 processor will allow smooth playback of most video and multimedia content. High resolution and high bitrate video at 1080p is a breeze for FBOX 3 TV.

Ferguson FBOX 3 TV presents new, prepared specially for the needs of TV remote control with which to navigate the TV channels, view information about them, the choice of audio track and subtitle will not be a problem. Convenient key distribution provides the seamless and intuitive operation.

Hold down the OK button on the remote control…

…fill next desktop with applications!

Your applications under your control! Move them on your desktop, remove from the desktop, delete them, or even uninstall them directly from the desktop. Without digging in settings, without jumping through the options… And this is just the beginning of the changes we’ve made!